Confession: I was a Myspace fanatic; it perfectly suited my taste for design and personalization. I would spend hours tooling away to achieve the perfect profile page (in between posting thinly-veiled bulletins about boys I was crushing on). When, one fated day, I finally clicked the delete button on the empire I’d spent two years perfecting, I wondered if I would ever find such a pure form of self-expression again.

For years afterwards, I languished in the blue-and-white sparsity of Facebook. The look and feel of Myspace had suited my social needs, but my creativity began to suffocate under the weight of Mark Zuckerberg’s minimalism. 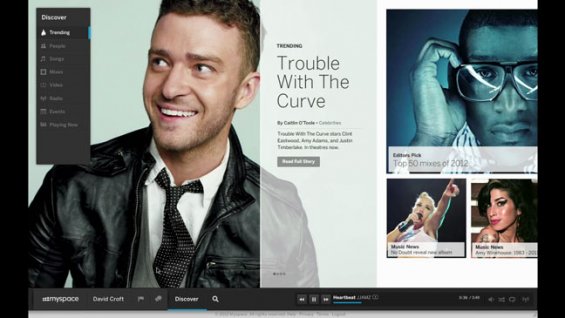 THE DESCENT INTO SOCIAL NETWORKING OBSCURITY

Myspace was one of the first players to occupy the social media niche. When Myspace hit the market in 2003, it enjoyed immense success during its initial popularity. Once Myspace hit the scene, other platforms followed with sites that took the principles of Myspace and repackaged them. The ones that have managed to stay relevant were the ones who focused on specialized, user-friendly features that made connecting with friends easier and more seamless. Myspace was a visionary idea when it was first established, but it wasn’t able to adapt to a changing digital landscape. With Facebook recently outpacing Myspace as the biggest social networking site (boasting a mind-boggling 110 million users to Myspace’s 83 million), Myspace has seen a steadily declining number of user accounts and new registrations.

Users migrated to Facebook because it offered them a better service. Myspace’s notable lack of R&D, user interface, and accessibility drove people to a site that promised a streamlined way to connect with friends - even if it meant sacrificing some measure of personalization. But now, with Myspace overhauling their entire site, you might get the chance to have both.

The new Myspace, owned by an ad agency and backed by the dreamy Justin Timberlake, has implemented a redesign that sheds the excess weight the site had put on over the years and gets back down to what Myspace does best. The new Myspace home page promises, “we’re staying true to our roots in one important way--empowering people to express themselves however they want.” An introduction video that rolled out this week indicates that the new Myspace may live up to that promise. The sleek new design targets the musicians, photographers, filmmakers, and designers who were initially attracted to Myspace for the ability to showcase talent.

Myspace called upon brand and digital-development agency JosephMark, stationed in Brisbane Austrailia, to head up the overhaul. The result has even the most skeptic of techies nodding their heads with approval. Wired's Ian Steadman wrote, "Once-dominant now-withered social network MySpace has returned with new owners and a new design -- and, in all honesty, it looks pretty cool."

Facebook might be succumbing to the same threat that caused Myspace to experience their decline in popularity. As our desire to connect with friends collides with a desire to set ourselves apart through an expression of individual flair and personality. Facebook relegates even our most colorful moments to the same blue and white newstream as everyone else. The new Myspace seems to be promising a chance to break free of the boundaries social media has imposed so far. Myspace takes familiar material and applies more advanced design. The site is keeping up with advancements that new and old fans have already taken note of, in hopes of drawing them back into the creative realm of Myspace.

Myspace seems to have zeroed in on the issues that kept them lagging behind Facebook in terms of popularity -- the new design tackles them head on.

Whether the effort will be successful remains to be seen. The value of patience, combined with agility and a competitive intelligence, may just give MySpace a fighting chance. Myspace watched, waited, and then changed their tack.

After long hiatus, I’m reuniting with Myspace. The promise of an old flame feels good.

How do we know blogging regularly works? Because Verge Pipe Media began as a blog and grew into East Alabama's first HubSpot agency partner, that's how!

Join us as we share lessons learned, best practices, thoughts on leadership in the social media and mobile world of today and more.

Worried about missing something? Sign up for our monthly(ish) newsletter and you'll get to see the best of the best delivered right to your inbox.

Verge Pipe Media is an inbound and strategic marketing agency based in Auburn, Alabama. We partner with our clients to develop their digital story and solve complex brand, marketing and communication challenges using our imaginative inbound marketing best practices.

We develop and grow deep relationships for our partners across social media, word-of-mouth and digital channels for partners in higher education, non-profits and more.

At Verge Pipe Media, imagination fuels every step of our process. We place Integrity, Imagination, Leadership, Doing Work that Matters and Fun for our clients and ourselves as our core values.